This section contains a number of examples of Verilog and VHDL FSMs. All are synthesisable, but the precise synthesis results will depend on the coding style, and on any recoding of the FSM which may be carried out by the synthesiser. The source code contains no synthesiser directives to select a specific coding style, since these are vendor-specific.

All the examples implement this simple FSM: 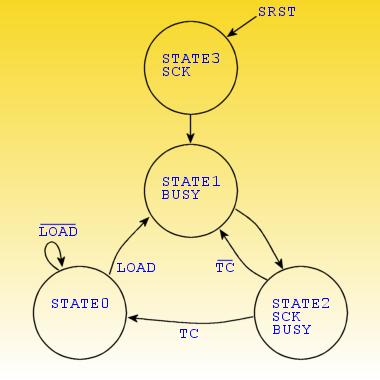 The FSM has three inputs (SRST, LOAD and TC), and two outputs (BUSY and SCK). SRST is a synchronous reset; the FSM resets to state 3.

A single testbench is used for all the examples (both VHDL and Verilog). This FSM is so simple that it can be tested simply by cycling through all the states from a reset. In general, however, a test for a more complex FSM would need to preload specific states (using the .P directive), and then test the state space around that state.

It is not generally practical to construct different testbenches for the RTL code and the netlist, as the synthesis output will change as different coding algorithms are tried (XST, for example, has 8 different algorithms). If the synthesiser is set to auto-encoding, it might also later change the algorithm if an external factor changes. This testbench avoids the problem by checking only the signals at the module interface, and not the state register itself (it may appear that the testbench does actually test the state register, but S0, S1, S2, and S3 are defined as combinations of the two output signals, rather than as specific values of a state register).

The expected testbench output is:

All the code examples produce exactly the same FSM, which is shown in the diagram above. There is a minor difference, however. SCK and BUSY are coded as combinatorial ouputs in Style #2 and Style #5, and as registered outputs in the other styles. However, coding an output as sequential or combinatorial may not actually have the desired effect in the synthesis netlist, for these reasons:

This needs to be considered carefully, as it has important implications for methodologies which require subblock outputs to be registered.

Implementing a combinatorial output as a register improves module timing, and is clearly beneficial. However, its usefulness is limited by the fact that there is no simple way of determining whether or not an output was registered. This means that this feature cannot be relied on if there is a methodology requirement to register the outputs of subblocks, and the FSM outputs are the subblock outputs.

There was a large variation in the synthesis results, with estimated cycle times ranging from 0.926ns to 1.298ns. The number of flip-flops varied from 2 to 6, and the total flip-flop and LUT count varied from 4 to 11. The results are summarised in the table below.